You are here: Home / Passivator Liquide

Probably your dear producer, who is producing machines and parts manufactured with stainless steel alloy group, has repeatedly wondered how to observe all technical and technical issues during production, the surface color of your produced product relative to Other products from foreign countries or production lines and imported parts from other countries have opaque surfaces or at the time of installation and operation, they lost their color and glossiness during a very short period of time and, in some cases, rust Very small and large at the level that leads to the disapproval of the employer and the like are pleasant things. None of the parties is concerned, this is only one of the stages of surface washing. Unfortunately, in our country, most traditional producers do not know about this process and do not use it, and only a few companies that meet standard or technology standards And the manufacturing process is imported under the guise of foreign companies. They use this procedure in their own products, and this is nothing other than a wash-out procedure called passivation, which involves separating and removing all metal elements with a weak alloy or non-metallic elements and pollutants It is different at the metal levels used in the production, which causes it The elimination of all of the contaminants, carbides and metal oxides and low-alloy elements on the surface layer at the base of the metal surface, which is from the process of casting and forming to the work of the main alloy, is now microscopically, macroscopically and molecularly On the surface of the base metal, imagine that your product or its components and details should be used in a humid environment, such as food production lines, or in a region such as northern Iran or south of Iran with relative humidity To be in high places or in conditions such as burial under the earth’s layers or in the vicinity of Neka With mineral or water ions in water, something that happens is that factors such as harmful pollutants and dusts, or corrosive and corrosive elements, and microorganisms and bacteria present in the environment on certain points observed in the following images Begin to form points for the onset of corrosion or the onset of growth of microbial and bacterial colonies, the bedding and root of these activities are the same points with low alloy and impurities or dirt, contaminants resulting from the production stages, or low and low alloy Quality is also a lot of other substances and contaminants from the stage of production D, warehouse, sales and build on the base metal remains in place, this issue is doubled.

The solution to the above is a procedure called passivation, which is a submersion or spraying of materials by spray or any other method that causes surface contact between surfaces and chemicals. In this process, all low-alloy elements and microorganisms and harmful substances The abovementioned metal surface is uniformly free from any contamination and impurities, which results in the destruction of all undesirable elements from the surface of the metal, resulting in a significant glare on the surface of the metal and the pieces made, the lack of Maturing in the long run (between 2 and 3 years) and preventing the creation of bells and effects of this. 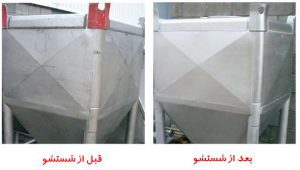